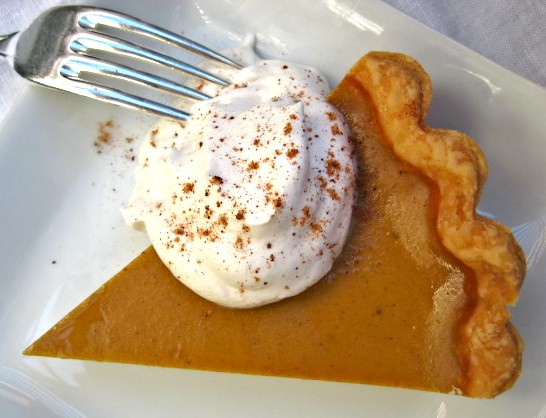 I've been making a version of Flour Bakery + Cafe owner Joanne Chang's  banana bread for years, and thought it fitting that I inaugurate the recent addition of her new cookbook, Flour: Spectacular Recipes from Boston's Flour Bakery + Cafe, to my library by making her Super Pumkiny Pumpkin Pie for Thanksgiving. I have a soft spot for pastry chefs such as Chang who use adjectives like "pumpkiny," and write their recipes with instructions to "unfurl" and "pleat," which sound a lot like "twirl in your pleated skirt."
True to its name, this pie is super pumpkiny -- the result of cooking the pumpkin down to a paste so that it withstands the shocking quantities of milk and cream in the recipe. (This pie is not for the faint of heart.) True to form, I took some minor liberties with it. I used homemade pumpkin purée (something I always go to the trouble to make because I prefer the taste so); cooked it down for 7 minutes instead of 40 to 45;  and added 1/4 cup pure maple syrup and 1 tablespoon brandy.
A word to the wise: although Chang states that the recipes for both the filling and the Pate Brisee II (see below) yield enough for one 9-inch pie, I found that both made enough for at least two pies. No worries. I happened to be simultaneously making Bobby Flay's Pumpkin Bread Pudding, so I substituted the extra pie filling for the custard in his recipe, and froze the extra dough. If you're not in the same predicament (and what a predicament it was), halve the recipe, make two pies or visit Food Network for a version that appears to yield a single pie.
Happy baking, and be sure to unfurl and pleat as instructed.
﻿﻿﻿ ﻿﻿﻿
Super Pumpkiny Pumpkin Pie
Makes (ahem) one 9-inch pie.

1. Remove the dough from the refrigerator. On a well-floured work surface, roll out the dough into a circle about 12 inches in diameter and 1/8 inch thick. Roll the dough circle around the pin and then unfurl it on top of a 9-inch aluminum pie pan or glass pie dish. Press the dough gently into the bottom and sides of the pan. Evenly pleat the overhanging dough with your fingers to create a decorative edge, or use scissors to trim the overhang, leaving a 1/4-inch lip (to allow for shrinkage in the oven). Refrigerate the pie shell for at least 30 minutes. (The pie shell can be tightly wrapped in plastic wrap and refrigerated for up to 1 day or frozen for up to 2 weeks. Bake directly from the refrigerator or freezer.)

2. Position a rack in the center of the oven, and heat the oven to 350 degrees F.

3. Line pie shell with parchment paper, fill with pie weights, and blind bake for 35 to 45 minutes, or until the entire shell is light brown all the way through.

4. Meanwhile, scrape the pumpkin purée into a medium saucepan and stir in the brown sugar. Place over medium-low heat and cook, stirring occasionally with a wooden spoon, for 40 to 45 minutes, or until the pumpkin has reduced to a somewhat thick paste and darkened. Remove from the heat and whisk in the ginger, cinnamon, nutmeg, cloves and salt. Then whisk in the sweetened condensed milk and evaporated milk.

5. In a large bowl, whisk together the eggs and egg yolk until blended. Slowly whisk in the cream and vanilla (and the maple syrup and brandy, if using), then gradually whisk in the pumpkin mixture and continue whisking until thoroughly mixed.

6. When the pie shell is ready, remove from the oven and leave the oven set at 350 degrees F. Remove the weights and parchment, and pour the pumpkin custard into the shell.

7. Bake for 55 to 60 minutes, or until the custard is just set. The edges of the custard will puff up a little and the center should still have a little wiggle in it. Let cool on a wire rack for at least 2 hours. Serve at room temperature or chilled. (I found this pie tasted best after being refrigerated for 24 hours.)

8. The pie can be stored in an airtight container in the refrigerator for up to 3 days.

1. Using a stand mixer fitted with the paddle attachment (or a handheld mixer), mix together the flour, sugar and salt. Scatter the butter over the top and mix on low speed for about 45 seconds, or until the flour is no longer bright white and holds together when you clump it and pecan-size lumps of butter are visible throughout.

2. In a small bowl, whisk together the egg yolk and milk until blended. Add to the flour-butter mixture all at once. Mix on low speed for about 30 seconds, or until the dough barely comes together. It will look really shaggy and more like a mess than a dough.

3. Dump the dough out onto an unfloured work surface and gather it together into a tight mound. Using your palm and starting on one side of the mound, smear the dough bit by bit, starting at the top of the mound and then sliding your palm down the side and along the work surface (at Flour we call this "going down the mountain") until most of the butter chunks are smeared into the dough and the dough comes together. Do this once or twice on each part of the dough, moving through the mound until the whole mess has been smeared into a cohesive dough with streaks of butter.

4. Gather up the dough, wrap tightly in plastic wrap, and press down to flatten into a disk about 1 inch thick. Refrigerate for at least 4 hours before using. The dough will keep in the refrigerator for up to 4 days or in the freezer for up to 1 month.