In light of yesterday's post about the evils of flour and sugar -- the hilarity of which I hope wasn't lost on you -- today's post about Eggnog "Cheesecake" Squares is nothing if not ironic. Yes, folks, it's another dessert recipe. And it's probably the most processed thing I've ever made, thanks to the use of gluten-free graham crackers and dairy-free cream "cheese". (The latter tastes and smells so chemical, I nearly gagged. Thankfully this goes away upon baking.)
But 'tis the season for giving -- and indulging -- so this post is a holiday gift to some of my favorite bloggers-slash-readers who avoid gluten and/or dairy. Lindsay, Katie and Stew, this one's for you. (And your friends and family, who won't have a clue these treats are dairy- and gluten-free.) Enjoy!

Note: These squares aren't vegan because they rely on eggs -- particularly yolks -- as a binder, but I have faith Katie can veganize them. Or Angela, who could add some of her homemade Vegan Nog. Yum.)
﻿ 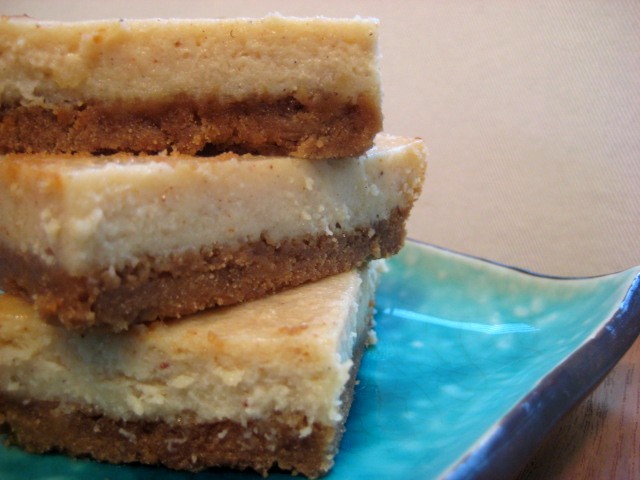 
1. Heat oven to 350 degrees F and coat a 9-inch square cake pan* with cooking spray. In a medium bowl, combine the graham cracker crumbs, melted Earth Balance and 3 tablespoons sugar. Press into bottom of pan and bake for 12 minutes, rotating pan halfway through. Set on wire rack to cool.
2. Meanwhile, in the bowl of an electric mixer fitted with the paddle attachment (you could easily mix this by hand), beat the cream cheese substitute on medium speed with the eggs, egg yolk, brandy, maple syrup, vanilla, 3/4 cup sugar, oat flour, cornstarch, nutmeg and salt until thoroughly combined and smooth. Pour filling over crust.
3. Bake on middle oven rack until filling is set, rotating pan halfway through, about 40 to 45 minutes. (This took exactly 40 minutes for me, and the filling puffed up like a souffle. However it deflated and became perfectly flat and smooth as it cooled.) Cool on a wire rack for about an hour, then cover and chill for at least 3 hours or up to 1 day.
4. Cut into bars and serve.
*Notes:
- You may remember my November announcement that I wanted to recreate my mom's tofu cheesecake for Thanksgiving, and that it was a flop which went missing from my holiday table. Then I bought the Martha Stewart Holiday Cookies magazine, fell in love with the Eggnog Cheesecake Bars (which have made the rounds on some blogs), and thought maaaaaybe I could take a traditional cheesecake recipe and make it dairy- and gluten-free. Bingo! These babies are outstanding and taste exactly like traditional cheesecake.
- I wasn't mad about the idea of using a 9" square cake pan because I could foresee disaster when trying to cut and remove the squares from the pan. I was right -- I mangled about half the squares. So I would recommend using a springform or tart pan with removable sides.
- If you don't have or don't like oat flour, omit it and increase the cornstarch to 1 1/2 teaspoons.
- I bought Silk Nog with the intention of using it in place of the 3/4 cup of dairy eggnog in the Martha Stewart recipe, but when I poured it from the carton I realized it was too watery. I tried cooking it down to the thickness of traditional eggnog, but to no avail. So I ditched it. To compensate, I doubled the nutmeg and added 1 tablespoon maple syrup.
- The Martha Stewart recipe calls for baking the pan of cheesecake squares in a water bath, but I didn't think it was necessary. I was right.
P.S. I know, I know -- more wretched photos. It's still raining, which means no light or outdoor shoots. Hastily "styling" and photographing these babies before rushing out the door to work doesn't help either. Especially when a restless puppy is gnawing on my ankles.