Remember how I told you I'd share the results of my first attempt at making a gluten-free, vegan version of our beloved melktert, provided it wasn't a disaster?

Well, it wasn't a disaster! It needs some further refinement, but it's not bad.

Actually, the more I think about it, the more pleased I am with the results. It's one thing to adapt a recipe to be gluten-free or vegan, and another thing entirely to tackle both at the same time. My two biggest fears -- that the custard wouldn't set and the crust would shatter and crumble -- didn't happen. A small victory in my gluten- (and mostly dairy-) free baking journey.

The crust -- made with King Arthur All-Purpose Gluten-Free Flour, Earth Balance Buttery Sticks, and a bit of sugar -- held together, but it's fragile for sure. The brown rice in the flour contributed a nice crunch, but there was a slight bitter aftertaste. There's no bean flour in the King Arthur blend, so I think the odd flavor might be from the Earth Balance. Earth Balance is also quite watery, so next time I'll use vegetable shortening.

As for the custard filling, to be honest it tastes more like coconut tapioca pudding than a milky cinnamon custard, but it's a start. I happen to love coconut tapioca pudding -- and spooned some of the filling, still warm from the saucepan, into a small bowl to enjoy with a sprinkle of cinnamon -- but the tapioca probably isn't necessary. I added it at the last minute out of fear that the custard wouldn't set without eggs (which you certainly don't have to omit if you're avoiding dairy but aren't vegan).

Lest I ramble on any more than I already have, my recipe and notes are after the photo...


Gluten-Free, Vegan Melktert (Milk Tart)
Serves 8
Unlike traditional melktert made with egg, in this version the custard isn't baked after being poured into the pre-baked crust.
For the crust:
1 1/4 cups gluten-free flour (I used a packaged blend as noted above, but plan to experiment with my own blends. I think teff and almond flours would contribute to a nice crust, and ground flax would help hold the dough together.)
1/2 cup vegetable shortening or 1 stick Earth Balance Buttery Sticks
2 tablespoons granulated sugar
1/4 teaspoon salt
Ice water (If needed; Earth Balance is so moist, I didn't need to add water.)
Additional gluten-free flour for rolling the dough
Vegetable cooking spray
1. In the bowl of a food processor (or in a medium bowl using a pastry cutter), combine the flour, shortening or Earth Balance, sugar and salt. Pulse until the mixture comes together in large clumps and holds together when you press it between your fingers. Add ice water, a tablespoon at a time, if needed.
2. Turn the dough out onto a sheet of plastic wrap or lightly greased parchment paper, cover with another sheet of plastic wrap or paper, and press it together to form a disc. Refrigerate, tightly wrapped, for at least an hour.
3. Heat oven to 400 degrees F. Unwrap the dough and place it on a floured work surface. Roll it out into a circle to fit an 8- or 9-inch pie or tart pan, dusting the rolling pin and dough with additional flour as needed. Transfer the dough to the pie or tart pan and press it evenly into the bottom, edges and sides. (My dough tended to crack and split at the edges and when I rolled it and when I transferred it to the tart pan, but you can press the pieces back together much more easily than when working with dough containing gluten.)
4. Bake the tart shell until golden brown, about 20 minutes, turning it as needed to ensure even browning if your oven has hot spots like mine. (You won't need to use pie weights, nor prick the dough with a fork to prevent it from bubbling up. It also doesn't shrink like many doughs that contain gluten.)
5. When done, remove the tart shell from the oven to a rack to cool while you make the custard filling.
For the custard:
3 cups coconut milk (I used "full fat," not lite, coconut milk, figuring the fat would make the custard more creamy and thick.)
3 sticks cinnamon, broken into pieces
1 whole nutmeg
1/3 cup plus 1 tablespoon cornstarch
1/2 cup granulated sugar
1/4 teaspoon salt
1/4 cup granulated tapioca (optional)
1 tablespoon vanilla bean paste or extract
Ground cinnamon for sprinkling over finished tart
1. In a heavy bottomed medium saucepan set over medium heat, bring 2 1/2 cups of the coconut milk, the cinnamon sticks and nutmeg almost to a boil. Remove from heat to cool for about 10-15 minutes.
2. Meanwhile, whisk the cornstarch, sugar, salt and tapioca (if using) in a medium bowl. Add the remaining 1/2 cup coconut milk and whisk or stir until thoroughly combined. Set aside.
3. Remove the cinnamon sticks and nutmeg from the warmed coconut milk, set the saucepan over medium low heat, and slowly whisk in the cornstarch mixture. Cook, stirring constantly (and scraping the sides, corners and bottom of saucepan to prevent clumping), until the mixture is thickened, about 10-15 minutes. Remove from heat, stir in the vanilla, and set aside to cool for about 30 minutes, until warm (you can speed this process by transferring the custard to a clean bowl and stirring it at regular intervals).
Assembly:
Pour the warm custard into the prepared tart shell, sprinkle with ground cinnamon to taste, and refrigerate, uncovered, until set. Slice carefully and serve.
1 comment:

I miss South Africa -- and my in-laws -- like crazy. So it didn't take much for my husband to persuade me to make a melktert on Sunday.

Melkwhaaaat? Melktert. Milk tart if you insist on English. Sheesh. 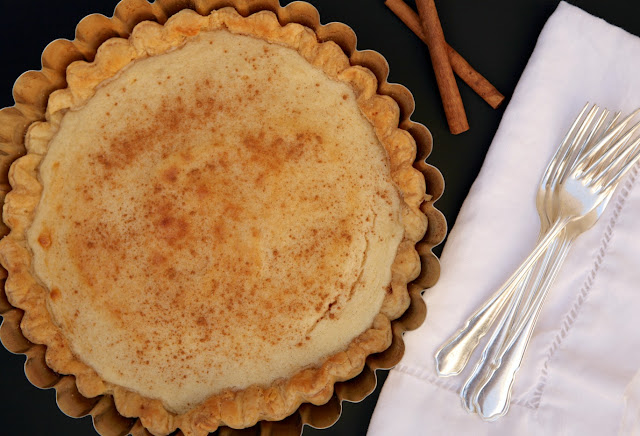 Few foods are more traditionally South African than melktert, a custard pie brought by the Dutch settlers. What differentiates melktert from European and American custard pies is the higher ratio of milk to egg -- milk which is infused with cinnamon and, occasionally, tangerine peel, almond and/or nutmeg. There are many variations, and everyone's ouma (grandmother) has "the best" (secret!) recipe, but the crust is typically puff or short pastry and the filling is often lightened with egg whites. 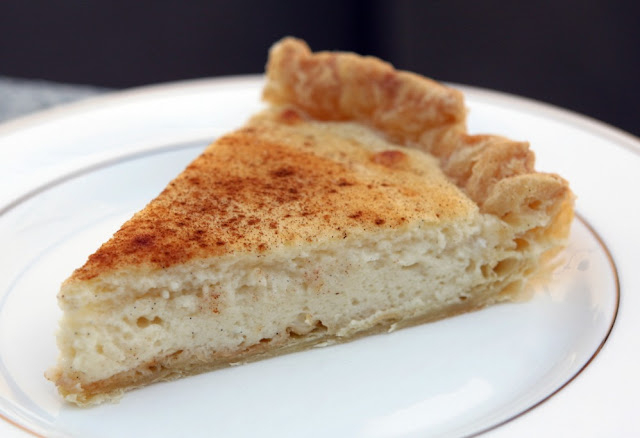 I've used several different recipes for melktert and this one from Epicurious is my favorite. With a few adaptations, of course:

- Infuse the milk with 3 cinnamon sticks, broken into pieces, and two whole nutmeg
- Substitute cornstarch for wheat flour (i.e., omit flour and use 1/3 cup plus 1 tablespoon cornstarch)
- Increase sugar to 1/2 cup plus 2 tablespoons
- Substitute vanilla bean paste for vanilla extract
- Reduce baking time for assembled tart to 30 minutes (10 minutes at 400 degrees F, then 20 minutes at 350)
- Sprinkle tart with cinnamon sugar before baking, as well as cinnamon before serving

The finished tart is light and barely sweet, the ideal companion to afternoon or evening tea, all of which makes me dream of sitting around the table with my in-laws in South Africa. {sigh}

And last night? Well, last night I made a gluten-free, vegan version that's been chilling overnight. I'll share the recipe if it's not a total disaster when I slice into it this evening...
3 comments: 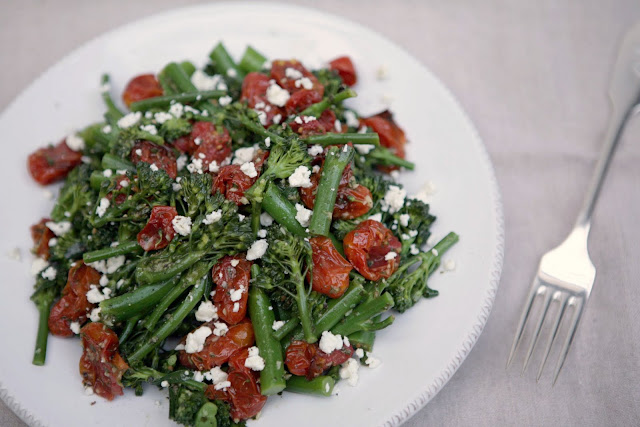 Now that you've got some roasted baby tomatoes and mint gremolata on hand, I suggest you toss them with warm broccolini, crumble some feta on top and dig in. It's an ideal dish for practicing the USDA's new food icon, MyPlate, which I love because it makes me think our country is getting serious about mindful, responsible eating.
And in case the USDA doesn't convince you to eat more vegetables, head over to the New York Times and read Mark Bittman's argument for a plant-based diet augmented with limited quantities of wild fish and sustainably, ethically and locally produced meat, dairy and eggs.
Amen.
Warm Broccolini Salad
Serves 4-6
This dish reminds me of the vegetarian antipasto (green beans and broccoli marinated in olive oil and lemon) at Tommaso's in San Francisco's North Beach. A favorite dinner spot during frequent family visits to the Bay Area, Tommaso's wood-fired pizza oven is renowned but I think their vegetables deserve equal acclaim.
1 lb. broccolini, rinsed and ends trimmed
2 tablespoons mint gremolata
1 cup roasted baby tomatoes
1 tablespoon crumbled feta
Salt and freshly ground black pepper to taste
1. Steam the broccolini until crisp-tender (about 5 minutes). Transfer to a collander and rinse briefly under cold water to halt the cooking process and preserve the bright green color. Roughly chop the warm broccolini, place it in a large bowl, and add the gremolata and roasted tomatoes. Toss to combine. Serve with a sprinkling of feta, salt and pepper. Or cover and marinate in the refrigerator for up to 24 hours before serving.
1 comment:

Email ThisBlogThis!Share to TwitterShare to FacebookShare to Pinterest
Labels: eat your vegetables, preaching 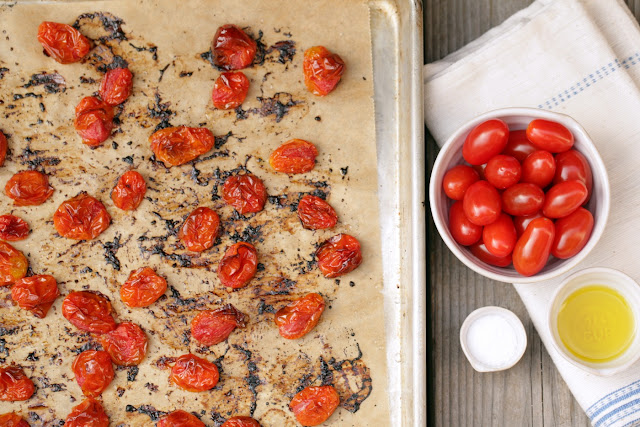 For me, few foods -- save for blackberries and watermelon -- conjure summer (or childhood) like tomatoes. Although the growing season in California is nearly year round, I associate tomatoes' cheerful skin (and shape!) and sweet-tart flavor with summer months. And something about their salty/mineral fragrance reminds me of evening rain on sun-warmed soil.
Summer won't officially be here for a few more weeks, but I like knowing I can get a taste of it (almost) anytime. So I keep baskets of cherry and grape tomatoes on hand for snacking. I just pop them into my mouth -- no need to dress them up or fashion them into sauce or pie (though making tomato tarts is on my To Do list).
But let's say you do feel like doing something a little more glamorous with them, or perhaps the tomatoes in your area haven't yet reached their peak flavor. Roasting them in the oven with a little olive oil and salt is just the thing to jazz them up without making too fine a point of it.
They're a great topping for fish, pasta, bread and vegetables. But be careful. You just might find yourself plucking them from the baking sheet and popping them into your mouth.
Oh, and another thing: your house will smell like a tomato patch that's been warming in the sun all day and it's just begun to rain.
Or am I overselling it?
Roasted Baby Tomatoes
1 pint cherry and/or grape tomatoes, rinsed and dried
About 1 teaspoon extra virgin olive oil
About 1/4 teaspoon kosher or coarse sea salt
1. Heat oven to 400 degrees F and line a baking sheet with parchment paper. Mound the tomatoes in the center of the baking sheet, drizzle with olive oil and sprinkle with salt. Using your hands, toss the tomatoes with the oil and salt to coat evenly, and scatter the tomatoes on the baking sheet. Be sure not to crowd the tomatoes together, or they'll steam instead of roast.
2. Roast for about 20 minutes, or until the tomatoes begin to wilt and wrinkle. Using a spoon or spatula, gently stir and toss the tomatoes around on the baking sheet and return to the oven for another 20 minutes, or until the tomatoes have a slight char.
3 comments: