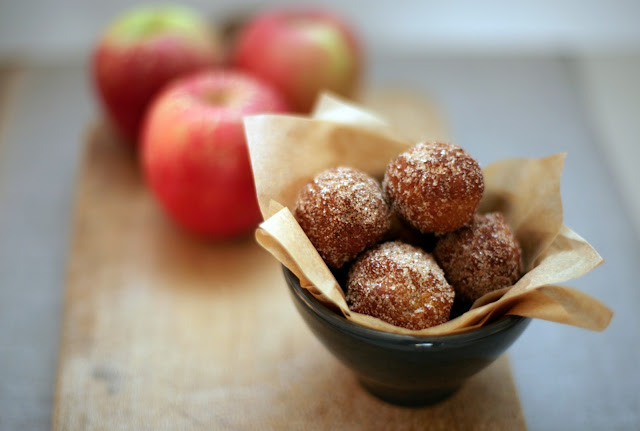 It was a conspiracy of sorts which led me to whip up a batch of apple cider doughnuts last weekend. (Whip up? Who am I kidding? My first attempt was horrific. The second time around, the doughnuts were good but not great. The third time? Stay tuned.)
I've been meaning to make doughnuts for quite some time, as they're one of the few sweets I have yet to try and replicate in my own kitchen. But frying up a bunch of sugary dough and drenching it in more sugar just hasn't been at (or near) the top of my list of priorities. I rarely eat commercially made doughnuts, so why would I tempt myself with a tray of homemade ones?
But lately, everyone at work has been going on and on about apple cider donuts; about how deliciously seasonal and fleeting they are. The doughnut shop version of the Starbucks Pumpkin Spice Latte, if you will. (Which, by the way, I tried once and won't bother ordering again. Sorry, PSL fans.)

And then last week, when I popped in to Sur La Table for something I can't even recall, I picked up a copy of Lara Ferroni's Doughnuts: Simple and Delicious Recipes to Make at Home. Wouldn't you know it, on the first page to which I flipped was a recipe for apple cider doughnuts. Conspiracy, I tell you.
So I bought the book -- and a deep fry thermometer and a baked doughnut pan -- and spent the better part of Friday night through Sunday afternoon trying to turn out perfect doughnuts. I experimented with baked and fried versions of apple cider, pumpkin and basic raised doughnuts, as well as various glazes and coatings. And yes, now that you mention it, I made some popcorn balls too.
I blew through a lot of flour, sugar and oil, and while very few of the doughnuts I made were satisfying or even edible, it felt good to be back in the kitchen making something special and new; something to try and style into a decent photograph. I have such a long way to go, and the process is sometimes so frustrating I want to give up, but I'm enjoying learning and growing. After all, isn't that what life is about? That, and the occasional doughnut conspiracy. 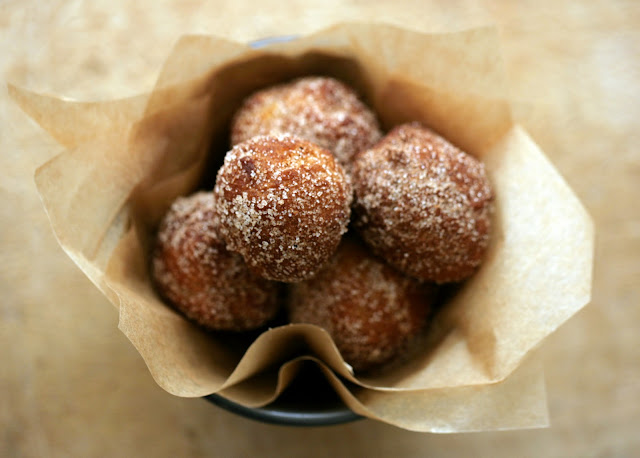 Apple Cider Doughnuts
From Doughnuts: Simple and Delicious Recipes to Make at Home by Lara Ferroni
1 3/4 cups all-purpose flour
1/4 cup graham flour (I subbed all-purpose flour)
2 teaspoons cinnamon
2 teaspoons baking powder
1 teaspoon baking soda
1/2 teaspoon salt
2 tablespoons unsalted butter or vegetable shortening, at room temperature
1/2 cup superfine sugar (I used regular granulated sugar and increased the amount by 2 tablespoons as instructed in Lara's book)
2 egg yolks, at room temperature
1 teaspoon vanilla extract
1/4 cup apple cider, at room temperature
1/4 cup buttermilk, at room temperature
Vegetable oil for frying
Special equipment: deep fry thermometer.
1. In a medium bowl, whisk together the flour(s), cinnamon, baking powder, baking soda, and salt. Set aside.
2. In the bowl of a stand mixer fitted with the paddle attachment, cream the butter and sugar together. Add the egg yolks and beat until the mixture is fluffy and pale yellow. Use a wooden spoon to stir in the vanilla, cider and buttermilk. Add the dry ingredients and stir just until the mixture comes together in a soft, slightly sticky dough. Cover and refrigerate for 15 to 20 minutes. (I refrigerated mine overnight.)
3. Roll out the dough on a lightly floured surface to about 1/2-inch thick. Cut the doughnuts out with a 2 1/2 inch diameter cutter. Re-roll any scrap dough. (Note: I wasn't happy with the flat shape when I fried and baked these, so I ended up rolling them into 1 1/2-inch balls.)
4. Heat at least 2 inches of oil in a heavy-bottomed pot until a deep fry thermometer registers 360 degrees F (182 degrees C). With a metal spatula, carefully place the doughnuts in the oil. Fry in small batches, taking care not to overcrowd the pot. Cook until a rich golden brown, about 1 minute on each side. (At 1 minute per side, my doughnuts were raw in the middle. At about 3 minutes per side, they cooked through.)
5. Remove with a slotted spoon and drain on paper towels. Let cool to the touch before glazing and eating. (I dredged mine in cinnamon sugar.) You can also bake these doughnuts in a doughnut pan in a 350°F oven for 5 to 10 minutes, but they won’t achieve the same rich golden color. (These were wretched when baked -- dry, flat, tasteless.)