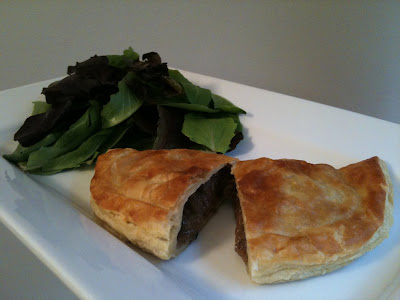 Today I made a big batch of Bison Steak and Mushroom Pies for my husband, who has been asking me to make Steak and Kidney Pies ever since we returned from South Africa in April. Since today was the World Cup final and closing ceremonies, and we were missing our family in South Africa terribly, I figured the pies would make a fitting lunch.

This was my maiden voyage into Steak and Kidney Pie territory, so I consulted my go-to cookbook for all things English: Nigella Lawson's How To Be A Domestic Goddess: Baking and the Art of Comfort Cooking. The filling from her Steak and Kidney Pudding recipe fit the bill, with some modifications -- most notably, substituting bison steaks for beef chuck, and making hand pies instead of steamed puddings.
The recipe had to be further altered when I went to the market to buy the kidneys and found they were out. So I increased the quantities of steak and mushrooms to compensate.
Bison Steak and Mushroom Pies
Adapted from Nigella Lawson's Steak and Kidney Pudding
Makes 12 small hand pies
Note: This recipe is not complicated, but it is a lengthy endeavor, as the filling must simmer for at least 1 1/2 hours. I made my filling the day before assembling and baking the pies, which is recommended as it improves the flavors. The filling is insanely delicious, and would be good in a variety of dishes or as a stew on its own.
For the filling:
3 tablespoons all-purpose wheat or gluten-free flour
1/2 teaspoon English dry mustard (e.g., Coleman's)
Salt & freshly-ground pepper
24 ounces bison steak (such as filets mignons), cut into 1/2 inch pieces (or meat of your choice, such as beef chuck, lamb, etc.)
4 tablespoons olive oil, divided
1 medium onion, diced
8 ounces crimini (baby portobello) mushrooms, halved (or quartered, if large)
1/2 cup plus 2 tablespoons beef stock
1/2 cup plus 2 tablespoons stout or dark ale (such as Guinness)
2 teaspoons natural oyster sauce
1 teaspoon corn starch dissolved in 1 tablespoon water (if needed to thicken the filling)
For the pastry:
4 sheets puff pastry or 1 recipe of your favorite pie dough (enough for a large double-crust pie)
For the egg wash (optional):
1 egg whisked with 1 tablespoon milk or water

1. Preheat oven to 250 degrees F. Combine the flour, mustard, salt and pepper (to taste) in a gallon Ziploc bag. Add the steak and shake to coat with flour.


2. In a dutch oven or heavy, lidded pot set over medium heat, warm 2 tablespoons olive oil. Brown the steak in batches, removing each to a paper towel-lined plate to drain. Be sure to scrape the floury bits from the bottom of the pan and add more oil as needed. Set aside.


3. Saute the onion in the pan until it starts to turn translucent, adding more oil if needed. Add the mushrooms and saute until they begin to soften.


4. Return the meat to the pan with the onions and mushrooms, and add the beef stock, stout and oyster sauce. Bring to a boil, scraping any browned bits from the bottom. Cover and transfer to the preheated oven to cook for about 1 1/2 hours, stirring occasionally.


Note: My filling was still quite watery after 1 1/2 hours, so I removed the lid, increased the oven temp to 350 degrees, and cooked the filling for another 1/2 hour. If the filling needs to be thickened further yet, transfer the pan to the stove top, slowly stir in the cornstarch mixture while bringing to a boil, and stir until thickened. Set aside to cool. At this point, you may refrigerate or freeze all or half the filling for later use.


5. Heat oven to 425 degrees F. On a well-floured surface, roll out the puff pastry or pie dough to an approximately 10x10-inch square, then cut into quarters. Spoon about 3 tablespoons of the filling into the center of each square, then fold in half diagonally as if making a turnover. Press the dough together around the filling, trimming to a half-circle and crimping the edges with a flour-dipped fork to seal. Transfer each pie to a parchment-lined baking sheet and refrigerate so as to prevent the dough from becoming gooey. (Depending on your number of baking sheets and the size of your oven, you may have to assemble and bake the pies in batches. I ended up with four pies on each of my four baking sheets, which I then baked two at a time.)


6. If desired, brush each pie with the egg wash. Bake at 425 degrees for about 15 minutes, or until lightly browned, then reduce heat to 400 degrees, rotate the pans top to bottom and front to back, and cook for about another 15 minutes or until well-browned and bubbling. Serve immediately or cool completely, wrap tightly, and refrigerate or freeze for later.