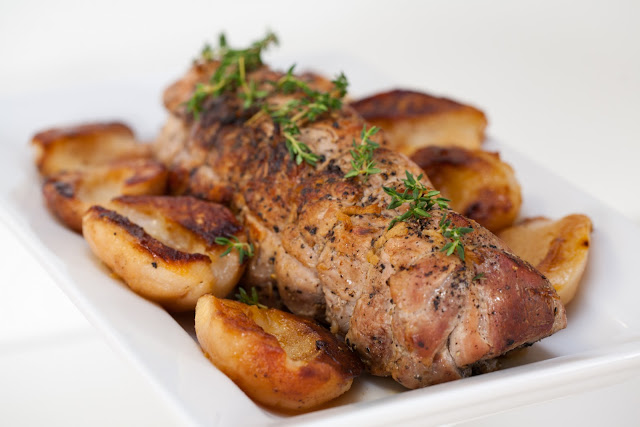 So far 2012 has been all about simplifying and refocusing. As 2011 came to a close and I reflected on the year that had passed, I realized the extent to which I let myself get sidetracked by concerns that don't ultimately matter. So I'm shifting my focus back to what's most important and real: family, friends, my dogs, work (in no particular order). I've not been on blogs or Twitter or Facebook much (although I am publishing links to this post on the latter two sites), and my Instagram posts are few and far between.
Among the many wonderful results of this social media greyout is that I'm not looking at my phone and its addictive social media apps every minute or two, and I'm freeing myself from some of the associated pitfalls that so easily erode happiness, such as Fear Of Missing Out and The Comparison Trap. I feel clearer, lighter and more content.
Something else that has me contented is spending Sunday afternoons in the kitchen preparing simple, comforting meals to reheat during the week. Roasting has been my cooking method of choice, and dishes such as crispy skinned buttermilk brined chicken, roasted smashed potatoes and pork tenderloin have been just the thing to enjoy at the end of long and busy days.

Roast Pork Tenderloin with Pears and Leeks
Makes 8 to 10 servings
This recipe was passed on to me by a dear friend who is an expert at treating family and friends to fantastic, healthy meals with minimal fuss. This dish is perfectly suited to a Dutch or French oven, but a large cast iron skillet or rimmed baking sheet will do just fine. (If using the latter, brown the tenderloin in a large pan on the stove before transfering it to the baking sheet.) I deviated from the recipe a bit in that I brined my pork tenderloin for 24 hours before roasting it. If I have the time I always brine pork and poultry. If you're new to brining, Cook's Illustrated's method is foolproof.
Ingredients:
1 boneless pork loin roast, about 3.5 pounds, excess fat and silverskin removed
Kosher salt and freshly ground pepper, to taste
2 Tablespoons olive oil
5 ripe red Anjou pears, or 4 large or 6 small apples, halved lengthwise and seeds removed
4 leeks, white portions only, trimmed, halved lengthwise and rinsed
Directions:
1. Position a rack in the lower third of an oven and preheat to 400°F. Season the roast liberally with salt and pepper. (Tie the roast with kitchen twine if it comes halved lengthwise.)
2. In a 5 1/2-quart (or larger) Dutch oven over medium-high heat, warm the olive oil. Add the pears or apples, cut side down, and cook until browned, about 5 minutes. Transfer to a plate.
3. Add the pork to the pot and brown on all sides, about 8 minutes total. Transfer to a plate.
4. Place the leeks, cut side down, in the pot in a single layer. Set the pork on top of the leeks and place the pears or apples along the sides of the pot, encircling the roast.
5. Roast until an instant-read thermometer inserted into the center of the pork registers 140°F, 45 to 55 minutes.
6. Transfer the pork to a carving board, cover loosely with aluminum foil and let rest for 10 minutes before carving. Transfer the leeks and pears or apples to a platter. Cut the pork into slices and arrange on the platter.