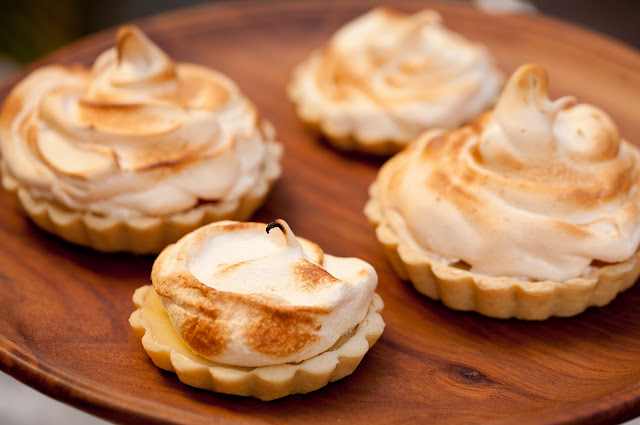 My latest baking endeavor began the way they often do -- with a challenge -- and played out in typical fashion: in fits and spurts of obsessive research and serious thought followed by compulsive ingredient gathering, fatigue and procrastination, and finally getting on with it (and making another trip to the market for fresh ingredients).

All of this is to say that I usually find the end result of all that activity to be disappointing, at least initially. I mean, it's difficult to do justice to the process. And while I do have my share of flops, more often than not I come around -- usually with feedback and encouragement from my supportive yet honest husband and friends -- and wind up quite pleased.

So yes, I'm pleased with these Meyer lemon meringue tartlets, which owe their existence to a South African friend and neighbor who issued the aforementioned challenge, informing me that American lemon meringue pie pales in comparison to the variety found in South Africa. I was unaware that there is any difference -- last year I'd sampled Tina Bester's version at her stall at the Biscuit Mill and didn't find it markedly different from what I was used to in the States -- but he explains that the version of which he is so fond owes its superiority to the meringue. French meringue to be exact, which is baked at a low temperature for several hours until completely dry. (Isn't this pie beginning to sound like the United Colors of Benetton of desserts?)

The plot thickened when I consulted arguably the foremost authorities on South African cooking and baking, Ina Paarman and Tina Bester. The most marked difference between their recipes and, say, Alton Brown's (which is probably as typically American as you'll find), is not the meringue but the filling. Huh.

Rather than the lemon custard to which we're accustomed in the States, Paarman's and Bester's fillings are nothing more than sweetened condensed milk whisked with a couple of egg yolks, lemon juice and zest. In Paarman's recipe, the filling is par-baked in a cookie crust for 20 minutes before being topped with a simple unstabilized meringue, baked for another 25 minutes and left to cool in the oven for 1 1/2 hours. It's not completely dry like French meringue; rather, it's gooey inside and crunchy outside, like a browned marshmallow.

Bester's meringue isn't baked at all. In her version, egg whites are warmed with sugar, whipped into soft peaks and arranged on top of fully baked tartlets. In a final flourish, they're browned with a kitchen torch. As for Bester's crust, which she has aptly named "Well Behaved Pastry," it's a riff on Pâte Sucrée. With more than the usual quantity of sugar and two whole eggs, it's beautifully tender yet pops out of the tins without losing its shape. Best of all, it doesn't shrink when baked. Well behaved indeed.

I realize this much too much explanation for pie of all things, so I'll wrap this up by saying:

And that, my friends, is more than you'll ever care to know about lemon meringue pie.
It also seems I have a challenge to complete. If I disappear for a while, you'll know where to find me. 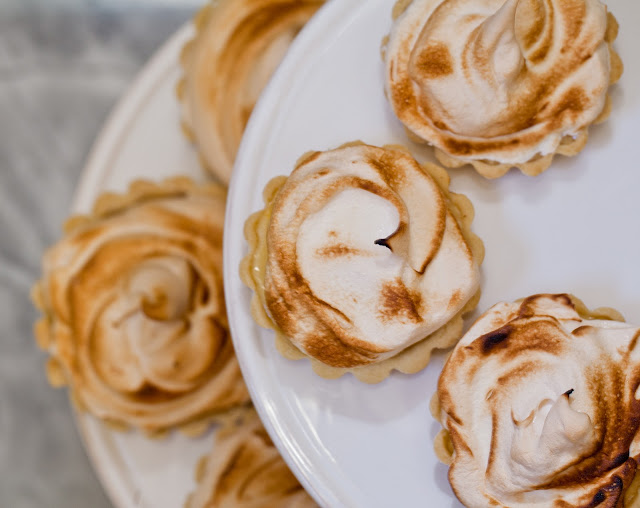 Meyer Lemon Meringue Tartlets
Makes about eight 6-inch tartlets, 15 3-inch tartlets or one 9- to 10-inch tart
The use of Meyer lemons isn't South African; I just happen to adore* them and they're abundant in markets right now. Their tangy-sweet flavor is perfectly suited to the milk-based filling.
*I used to pluck Meyer lemons from my great aunt and uncle's backyard tree and eat them like oranges all day long. Don't do that. You'll damage your tooth enamel.
For the crust (lightly adapted and converted from metric to standard from Bake: Tina Bester Queen of Tarts):
1 cup (2 sticks) unsalted butter, cold
2 cup granulated sugar
2 large eggs
4 cups flour
1/4 teaspoon salt
Note: This makes quite a bit of dough and you will have some left over. It makes lovely rolled and cut cookies, or you may freeze it, tightly wrapped, for up to one month. Also, I unintentionally made mine a bit more traditionally than Bester. Operating on autopilot, I separated the eggs and discarded the whites, and therefore had to add about 3 tablespoons of ice water at the end to bind the dough.
For the filling (lightly adapted and converted from metric to standard from Ina Paarman):
2 12-oz (395 g) cans sweetened condensed milk
1/2 cup boiling water
1 tablespoon lemon zest (from about 3 1/2 Meyer lemons)
1/2 cup freshly squeezed lemon juice (from about 4 Meyer lemons)
4 large egg yolks, room temperature
1/4 teaspoon salt
For the meringue (lightly adapted and converted from metric to standard from Bake: Tina Bester Queen of Tarts):
4 large egg whites
1 cup granulated sugar
1 teaspoon cornstarch
Make the crust:
1. In a food processor or stand mixer fitted with the paddle attachment, blend the butter and sugar until coarsely combined. Add the eggs, one at a time, followed by the flour and salt. Process or mix until a dough forms. Turn the dough out onto a sheet of plastic wrap, gather and press it into a disc, and refrigerate, tightly wrapped, for at least an hour or up to two days.
2. Heat oven to 350 degrees F. On a lightly floured surface, roll out the dough to 1/4-inch thickness. Place the tartlet tins upside down on the dough and cut circles about 1/2- to 1-inch larger than the tins all around. Turn the tins over and gently work the dough circles into them, making sure to press the dough into the edges and sides. Place on parchment-lined baking sheets and refrigerate for 30 minutes.
3. Blind bake the tartlet crusts (still on the baking sheets) for about 15 minutes or until they just begin to turn golden brown. (If making one large tart, the crust may need to bake for 5-10 minutes longer.) Remove from oven and reduce temperature to 325 degrees F.
Make the filling:
1. In a large bowl, whisk together the condensed milk (use the boiling water to get the last bit of milk from the cans), lemon zest, lemon juice, egg yolks and salt. Portion the filling into the prepared crusts (I use a liquid measuring cup for this), making sure it comes all the way to the top edges. Bake for 20 minutes while you make the meringue.
Make the meringue:
1. In a double boiler or medium saucepan set over the lowest flame, heat the egg whites and sugar, stirring constantly, until the mixture is just warm.
2. Transfer the warmed egg mixture to the (very clean and dry) bowl of a stand mixer fitted with the whisk attachment. Whisk on increasing speed (working up to high) until soft peaks form, about 8 minutes. Whisk in the cornstarch.
3. Remove the partially-baked tartlets from the oven. Pipe or spoon large dollops of the meringue on top of the hot filling. (If you have extra meringue, you can spoon dollops of it onto the parchment-lined baking sheets and bake along with the tartlets.) Bake for 25 minutes. (The meringue will be very slightly browned all over. If desired, remove the tartlets from the oven and brown the meringue with a kitchen torch, then return to the oven.) Turn off the oven and let the tartlets cool completely in the oven (about 3 hours). This gives the meringue a gooey, marshmallow center.
Tartlets may be stored in the refrigerator (the cool, dry air prevents the meringue from weeping) for up to two days.
Variation:
If you prefer a less marshmallow-like meringue and are okay with egg whites that aren't fully cooked, you may skip the step of baking the meringue. Increase baking time for filled tartlets to 45 minutes. Remove from oven and, while the filling is still hot, top with meringue and brown with a kitchen torch. Allow to cool completely before serving.