We're back from our fun, busy, fun, busy, fun weekend in Atlanta. There's so much to tell you about, I'm going to tackle it chronologically. Sounds boring, I know. I'll try and make it fun (not busy).

Before I begin, you should know:

When my husband picked me up from the airport on Friday afternoon (he had arrived in Atlanta the day before, for business meetings), I was ready to chew off my arm. This was due in part to a long, foodless flight, and was only intensified by reading Atlanta Magazine's "Best New Restaurants" issue while I waited for my husband to make his way through Spaghetti Junction, the thought of which made me all the more hungry. (Mmmmm...spaghetti.) We proceeded directly to Miller Union on the recommendation of some Twitter folks. (Thanks, Tweeps!) 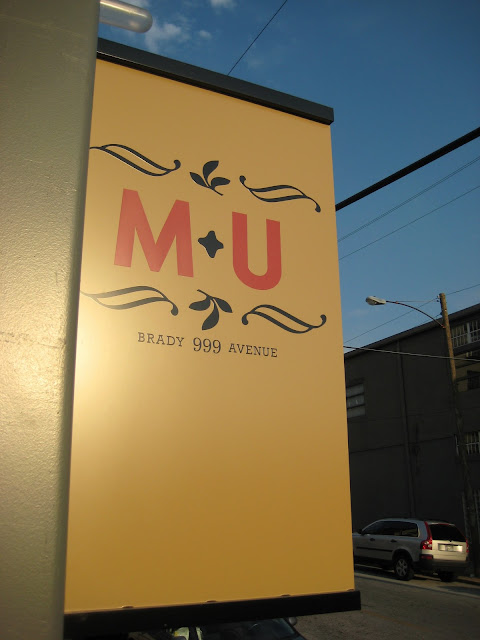 Miller Union has been heavily (and positively) reviewed in the press, and was just awarded Restaurant of the Year by Atlanta Magazine. It's also just our sort of place: the locally-sourced menu is in tune with the seasons, and as Atlanta magazine so aptly puts it, it's "a little bit country and a little bit rock 'n'roll, with a generous dash of hip hop."

We weren't able to get a reservation (bloody Restaurant of the Year frenzy), so we had appetizers at the bar while we waited for an elusive table to open up. The bartender was delightful, and didn't judge us too much for the nerdy photography and hand modeling.
﻿
﻿﻿
﻿

We munched on the bartender's recommendations: the Feta Snack (a dip made with local Feta and buttermilk, served with local veggies) and Country Pork Terrine. 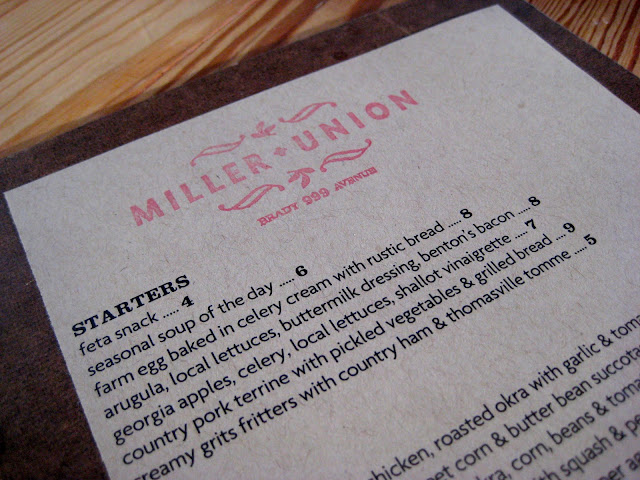 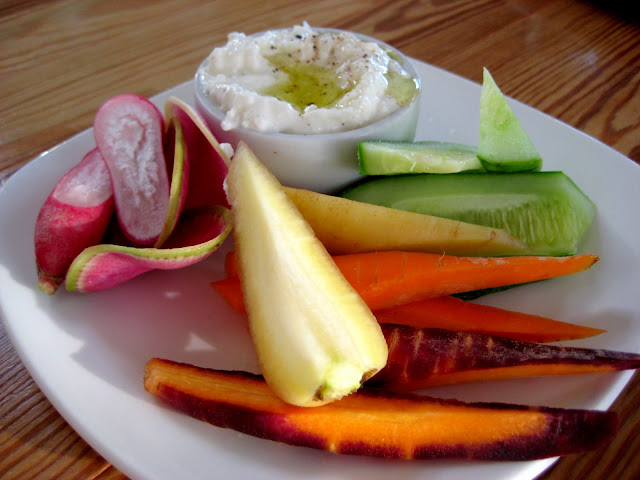 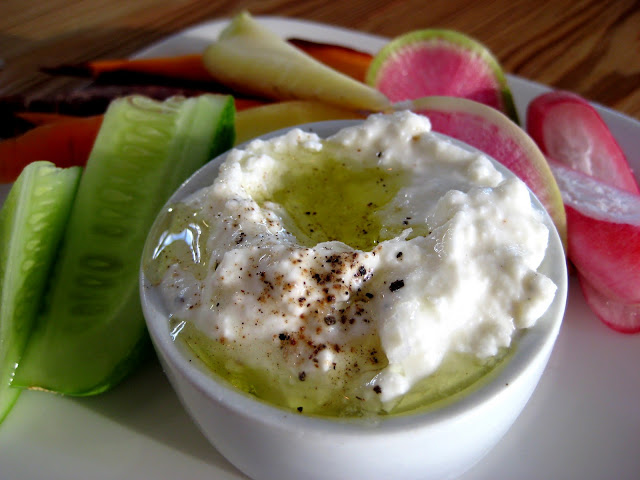 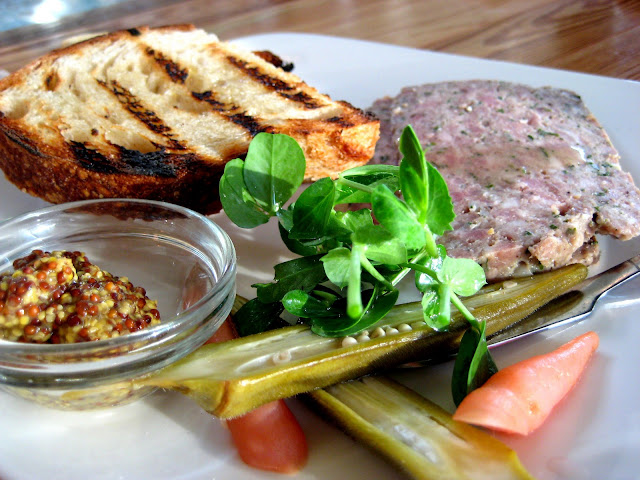 The Feta Snack was light and fresh and hit the spot on the warm afternoon. The Country Pork Terrine, made with the Benton's Country Ham, was nice, but I was more impressed with the pickled okra and house made mustard. I slathered the okra with mustard and it was goooood.

By the time we finished our appetizers a patio table had opened up, so we moved outside. 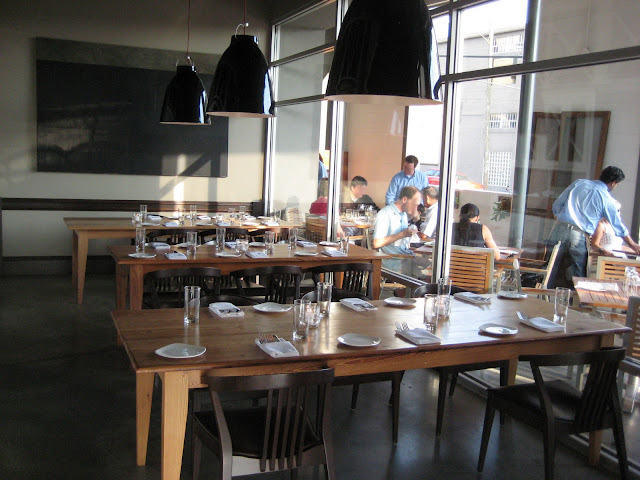 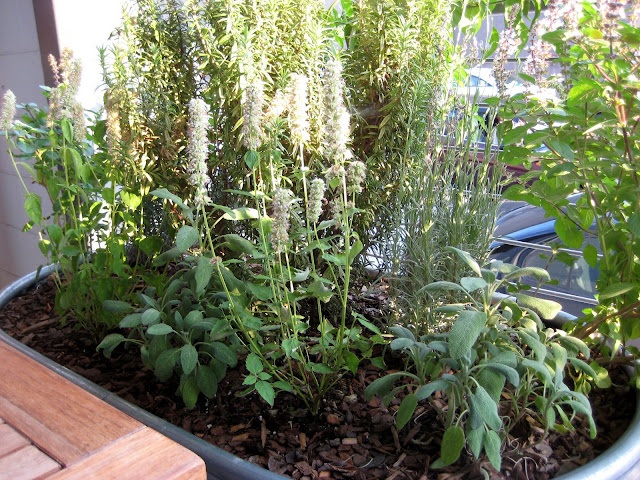 As is our usual practice, we ordered two mains to share: the Grilled Heritage Pork Tenderloin with Okra, Corn, Beans and Tomatoes, and the Grilled Mountain Trout with Bacon, Local Potatoes and Vidalia Vinaigrette. 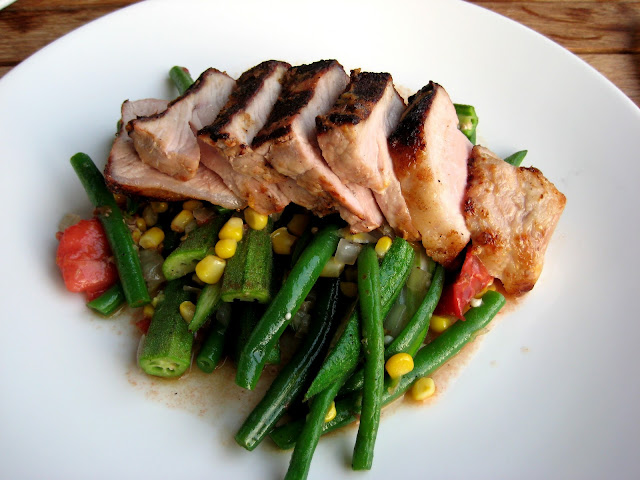 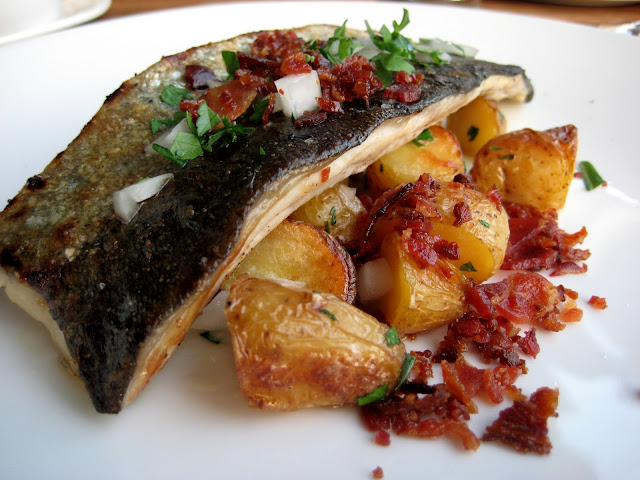 The pork tenderloin was flavorful, juicy and slightly sweet. The accompanying vegetables, however, were lackluster, and the corn was tough. The opposite was true for the trout dish: the fish was anemic and bland, but I couldn't get enough of the potatoes and bacon in their tangy vinaigrette. I love me some salty and sour.

For dessert, we shared the Peach Shortcake and the Fudge Brownie with Caramel Ice Cream. 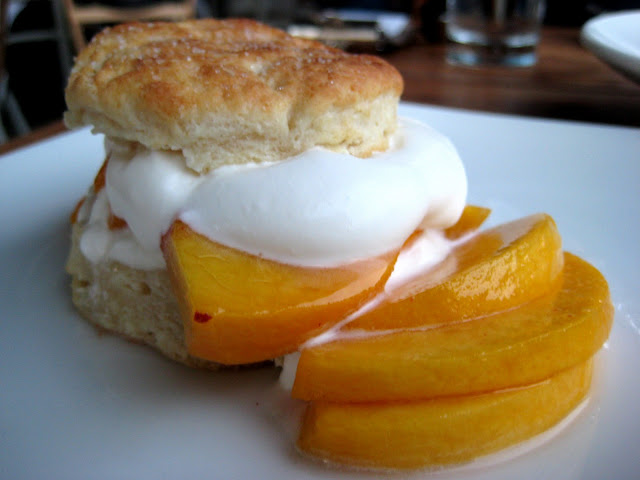 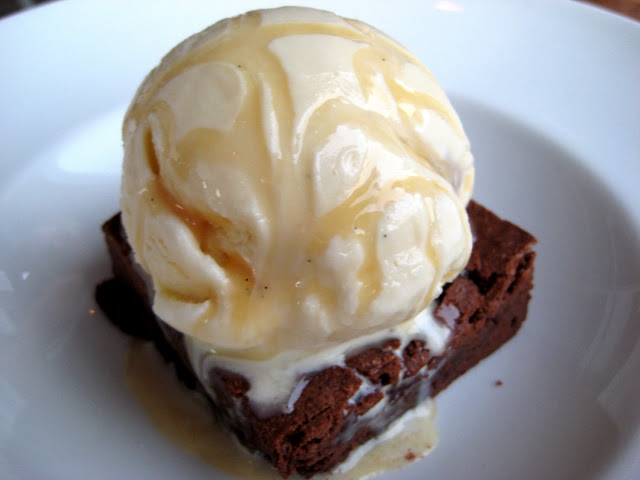 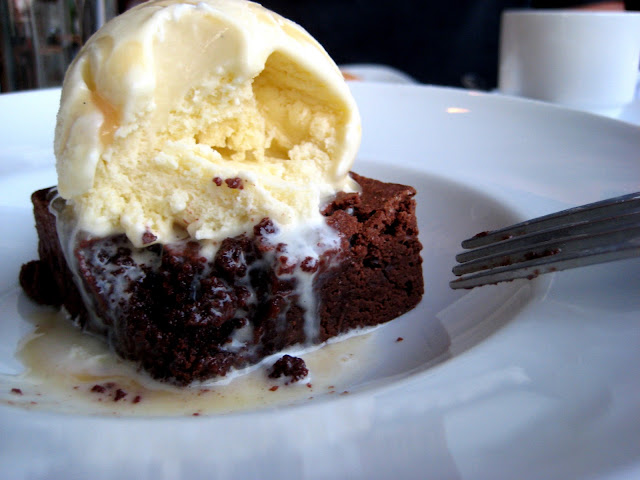 As much as I hate to tell you this, the desserts were lame. The shortcake biscuit, though light and fluffy, was over salted, and the peaches, though beautiful to look at, were hard and unripe. The brownie was not fudgy at all, but rather dry and flavorless. The house made caramel ice cream was nice, though. As was the service and atmosphere. One of Miller Union's owners, Neal McCarthy, stopped by our table for a chat as we were finishing dessert. In a word, he's spiffy, what with his British accent and perfectly-tailored suit and impeccable but decidedly unpretentious manners.
All in all, it was a lovely evening and I would visit Miller Union again. Up next: grassroots drag racing, a giant chicken and a pretzel the size of my head.