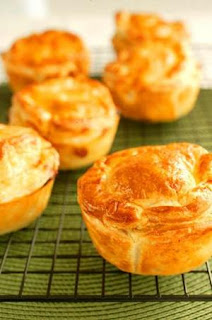 When my husband and I were in his home town, Cape Town, in March, we met an old friend of his for an afternoon snack at Jardine Bakery, the walk-up takeaway counter at the side of Jardine restaurant. The boys sampled a few sandwiches, and I went for a "Kickass Pie": a stunning muffin-sized (and shaped) chicken and mushroom hand pie.

Hand pies are ubiquitous in Cape Town, and I sampled as many as I could reasonably get away with while we were there. But Jardine's were a clear standout. The buttery, flaky crust gave way to chunks of mushroom and chicken in a tangy, creamy sauce that tasted of creme fraiche, lemon, thyme and nutmeg.

I forgot to take a photo, but the image at left (from Google Images) approximates Jardine's Kickass Pies.

I've always made individual chicken pot pies for my husband. Stored in the freezer, they can be popped into the microwave for a quick lunch or a savory bite with afternoon tea. So when we returned from Cape Town, I set out to recreate those Kickass Pies from Jardine.
However, in an effort to cut down on the fat and empty calories in my pies, I decided to make single-crust pot pies in 12-oz ramekins (the perfect size for my 6' 5" husband). You, of course, could make smaller pies in, say, 8-oz ramekins. And you could make these gluten- and/or dairy-free by making the appropriate substitutions.

*If using store-bought pie crust, you will need about 1 1/2 9-inch rounds. (For my most recent batch of pies, I used Wholly Wholesome Organic Whole Wheat frozen pie shells from Whole Foods, which I thawed, then cut and cobbled together.) If using homemade, you'll need enough for 1 1/2 single-crust pies.

2. Generously season the chicken breasts on both sides with salt and pepper. Roast for 30 minutes (or until internal temp of thickest part of breast registers 160 degrees/they are cooked through/juices run clear), turning over after the first 20 minutes. Set aside to cool. Once cooled, chop or shred into bite-sized pieces.

3. Meanwhile, in a large saute pan over medium heat, saute the leeks in the olive oil (seasoning with a bit of salt and pepper) until they begin to soften. Add the mushrooms and saute until they are also mostly cooked and have released their liquids.

4. Add the flour to the middle of the saute pan and cook, stirring, for a minute or two. Add the chicken broth and simmer, stirring, until the mixture begins to thicken.

7. Heat the oven to 400 degrees or to the temperature specified on the pie crust package (or your pie crust recipe). Cut the pie crust to about 1/2 to 1 inch larger than the size and shape of your ramekins. Spoon the cooled chicken mixture evenly into the ramekins and cover with the pie crust, either draping it over the sides or tucking and crimping it against the insides of the ramekins. Poke holes (or cut a small hole in the middle) in each crust to vent. If desired, brush the crust with an egg wash.

8. Bake for about 30-40 minutes, or until the crust is golden brown and flaky and the filling is bubbling. Serve immediately or, to freeze for later, cool the pies completely, wrap them tightly in plastic wrap and aluminum foil, and freeze.