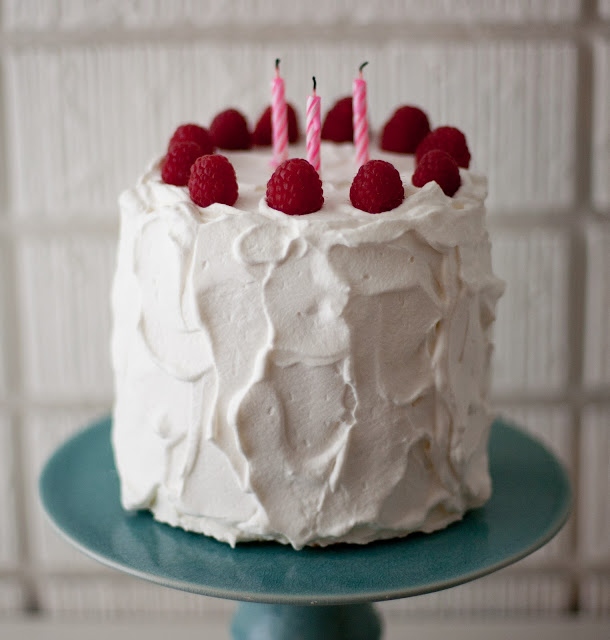 This cake was almost an afterthought. The night before my husband's birthday in November, after dinner reservations had been confirmed and gifts wrapped, it occurred to me that I hadn't thought about a birthday cake.

I fretted for few moments -- everyone should have a special cake on their birthday, how could I have overlooked such an important detail -- before realizing that I had all of the ingredients for his favorite cake: vanilla sponge layered with berries and cream. Even better, the cake looks impressive but is a breeze to make and decorate (the latter is decidedly not one of my strengths).

I didn't even have to stay up much past my bedtime. But don't tell my husband. For all he knows, I labored for hours. 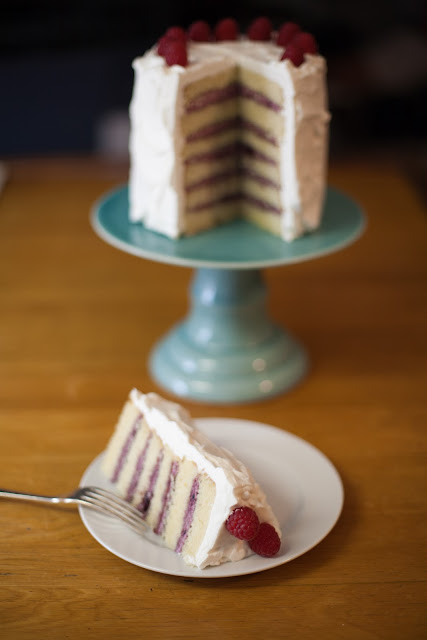 Winter Berries and Cream Cake
This cake seems like summer at first glance, but raspberry season extends through November. Take another look and the bright red berries against a blanket of snow white cream are the very picture of winter. Adorned with sprigs of seasonal greenery, this dessert would be a festive but light finale to a holiday meal.

The vanilla sponge is an adaptation of the vanilla cupcake recipe from The Magnolia Bakery Cookbook, which I lightened by separating the eggs, beating the whites and folding them into the batter at the end. I also added salt, an important but apparently overlooked ingredient. The whipped cream filling and frosting are old standbys in my kitchen.
For the cake:
1 cup (2 sticks) unsalted butter, softened but still cool to the touch
2 cups sugar
4 large eggs, separated (tip: separate the eggs when they're cold, then bring to room temperature)
1 1/2 cups self-rising flour
1 1/4 cups all purpose flour
1/2 teaspoon kosher salt
1 cup whole milk, room temperature
2 teaspoons vanilla extract or vanilla bean paste
For the frosting and filling:
2 cups heavy cream
2 teaspoons superfine sugar
1 teaspoon vanilla extract or vanilla bean paste
1 tablespoon seedless raspberry jam
1/2 to 1 pint fresh raspberries, rinsed and dried
Make the cake layers:
1. Heat oven to 350° F. Grease three 6-inch (or two 9-inch) cake pans, dust lightly with flour and line the bottoms with parchment rounds. Set aside.
2. In the bowl of a stand mixer fitted with the paddle attachment, cream the butter and sugar until light and fluffy, about 3 minutes. Add the egg yolks one at a time, beating well after each addition.

3. Meanwhile, whisk together the flours and salt. In a separate bowl or cup, stir the vanilla into the milk. Add the flour to the butter mixture in three parts, alternating with the milk, and beat until the batter just comes together. Set aside.

4. In a separate bowl that you are sure is clean and dry, beat the egg whites until stiff peaks form and no traces of runny white remain at the bottom of the bowl. Stir a third of the egg whites into the cake batter to lighten it, then gently fold in the remaining whites until no visible traces of whites remain.

5. Divide the batter among the prepared pans and bake on the middle oven rack for 20 to 25 minutes or until a cake tester or toothpick inserted into the middle comes out clean. Cool the cakes in their pans for 10 minutes, then remove from pans to cool completely on wire racks (be sure to remove the parchment from the cakes). The cakes can be wrapped tightly in plastic wrap and kept overnight before decorating and serving.

Make the filling and frosting:
1. Stir the cream and sugar together in a large mixing bowl and chill, with the whisk, for 30 minutes in the refrigerator or 10 minutes in the freezer.

2. Once the cream is chilled, add the vanilla, stir a few times and beat on increasing speed until soft peaks begin to form. It's important to under whip the cream because it will stiffen when you stir in the raspberry jam and decorate the cake.

3. Transfer about a third of the whipped cream to a medium bowl and stir in the jam until it's evenly distributed. Add more jam as desired to achieve a deeper color and stronger flavor.

Assemble the cake:
1. Set each cake on a flat surface, bottom side down, and use a long serrated knife to level the tops if they've domed or baked unevenly (my oven is not level, so everything I bake tips to one side). Cut each cake in half horizontally to make two layers. You'll end up with the six layer cake pictured above if you've used three 6-inch pans, or a four layer cake if you've used two 9-inch cake pans.

2. Place one cake layer in the middle of a serving plate or cake stand. Slide some parchment strips just under and all around the edges of the cake to keep the serving plate free of crumbs and extra frosting.

3. Spread enough filling to evenly cover the cake layer by a depth of about 1/4 to 1/2 inch. Repeat with the remaining cake layers, but don't top the final layer with the raspberry cream filling.

4. Using an offset spatula, spread the whipped cream over the sides and top of the cake. You should have enough for 1/2 to 3/4 inch of frosting. Use the spatula to make thick swoops in the cream if desired. Arrange raspberries around the top edge of the cake. (You'll use about 1/2 pint for a 3-inch layer cake, and closer to a pint for a 9-inch cake.) Gently remove the parchment paper strips from between the bottom layer and the plate, and serve.

Note: if desired, you could spread a very thin crumb layer of whipped cream over the cake and let it set in the refrigerator for 30 minutes to an hour before covering it with thick swoops of the remaining cream.